CSGB 2020 Online
We have come to celebrate our annual convention in another way, by issuing a special commemorative card which is only available during the event and seldom show up on internet auctions. Usually modern postcard size, these lovely cards are now becoming collectors items in their own right. They are well researched, and show one or more vintage cards from the area we are visiting.  Sadly there will be neither card nor convention this year, but we are very grateful to the current designer, who has taken time out to write us this short article about them….
​

Since 1995 I have had the privilege of producing the commemorative card for the Cartophilic Society of Great Britain’s Annual Convention and AGM, which I much enjoy doing. The first card I designed was for my home town of Cheltenham, and it was here that I first met Edward Wharton-Tigar, a very interesting person.

From 1995 onwards, with a few gaps, I have been involved in the design and print of the card. In 1998 I produced an additional card for the sixty year commemoration of the Society which depicted my drawing of the Anderton’s Hotel prior to the war, as the building is now sadly demolished.

Designing these cards requires many hours of research before I start putting anything on paper. As I am not completely computer literate I like to see my designs on paper before I proceed any further. My first task is to find famous/interesting people, places, landmarks etc. connected in some way to the town where the AGM is being held. The next step is to hope that these people or places are depicted on cigarette or trade cards. Sometimes I find I have to widen the area to take in the whole county. Luckily I have a large general collection where I find many of the cards but collectors, dealers and the internet, including ebay are my lifeline. For the background I usually try to find an old postcard or engraving which I am able to purchase on ebay but I am always wary of copyright laws. Sometimes I’ve approached museums and Galleries and they are usually very helpful in sending me images I can use.

The next stage is putting the design together with the printer, shuffling cards around, adding colour etc and finalising the design. I like to supply a minimum of three visuals for approval and usually send hard copies rather than online.

This has been the first year when a design has been approved, and is ready for print, but due to Covid 19 the Convention was cancelled with a rather uncertain future. However I look forward to designing the next card whenever that may be… 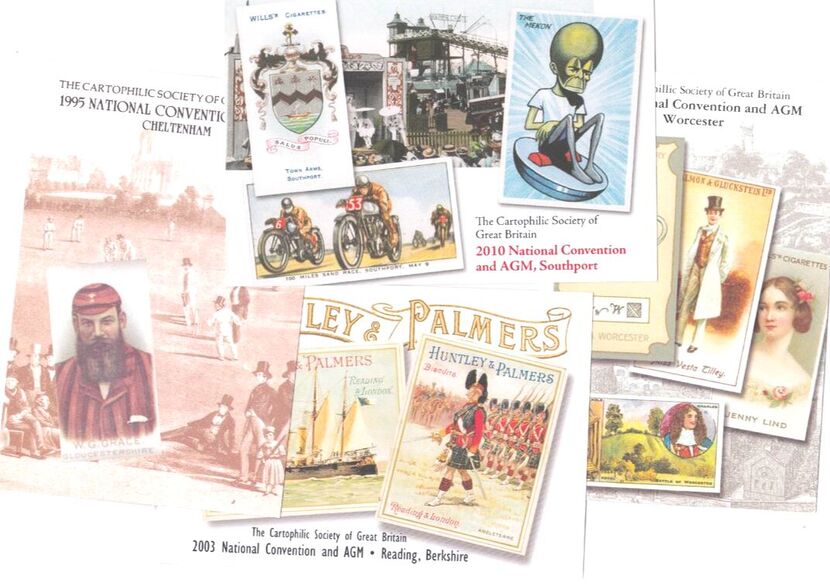 This image shows four of my cards, including that first commemorative, from Cheltenham 1995, with a cricket match in sepiatone for the background, and in the foreground is an image of an actual card, Dr W.G. Grace from Wills “Cricketers”.

The top card, for Southport 2010, has an image of Southport Fair, along with cards of Wills “Town Arms”, Ogdens “Motor Races” (1931), and probably the most modern card we have yet featured on a commemorative, The Mekon from Calvert`s “Dan Dare”. The connection was that The Eagle comic, which featured The Mekon, was published in the Southport Area.

The bottom card is from Reading 2003, it does not have a background image, but the scroll signage is from Huntley and Palmers Biscuits packaging, and two of their lovely large sized cards appear to good effect.

And the card at the far right is from Worcester 2007, it has a background of a local view, cathedral prominent, plus cards from Lea “Old Pottery and Porcelain”, Salmon and Gluckstein (Vesta Tilley), Wills (Jenny Lind) and F & J Smith “Battlefields of Great Britain”.

and now may we present "Our Convention Card Gallery"

If anyone has any other cards than shown here, please tell us so that we may record the details. 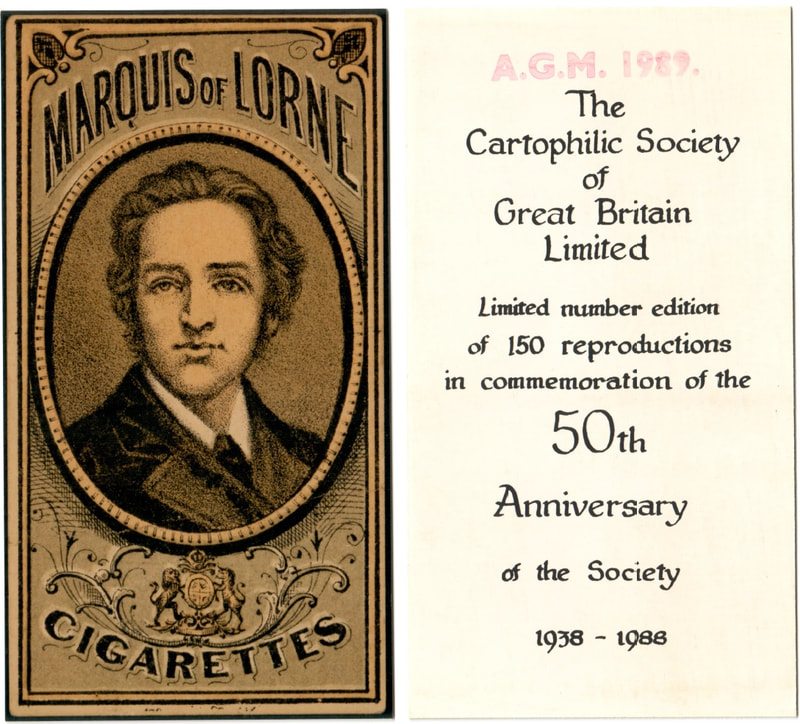 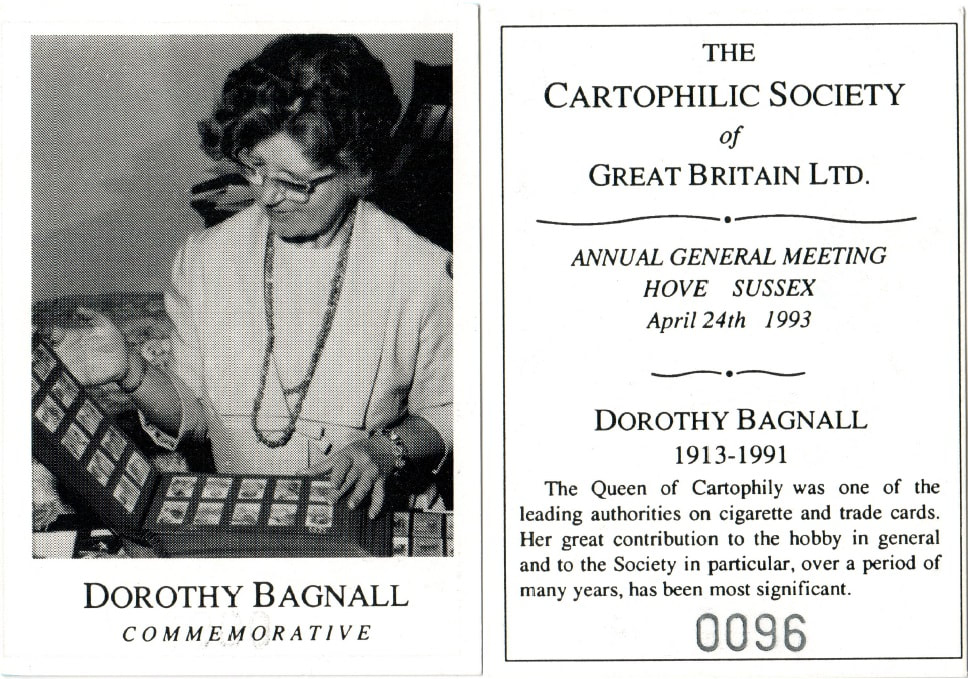 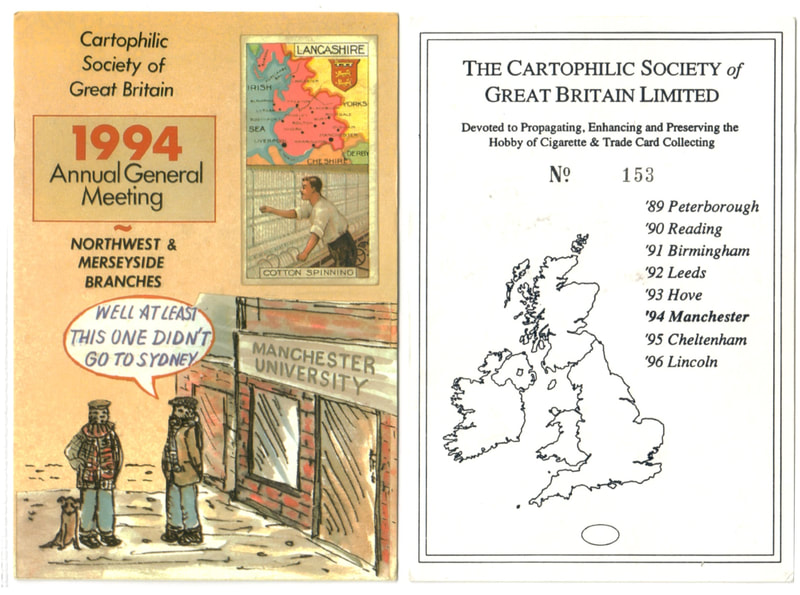 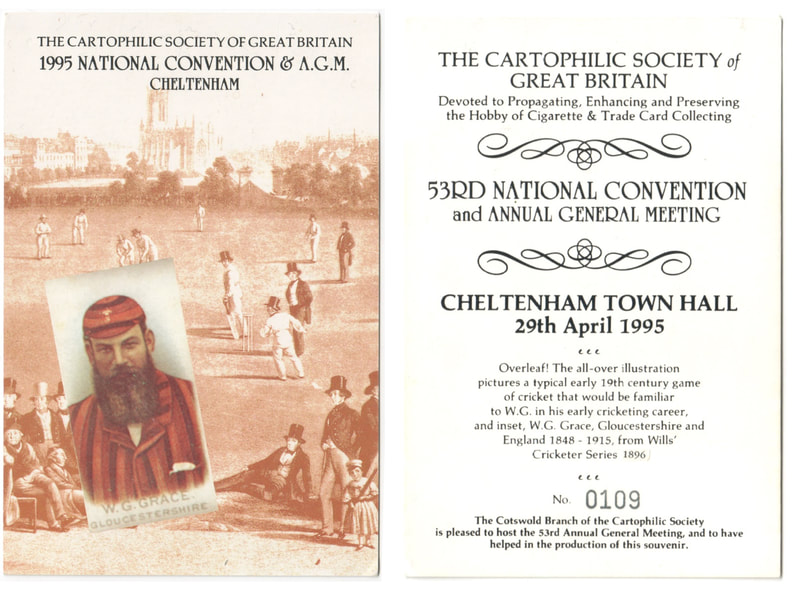 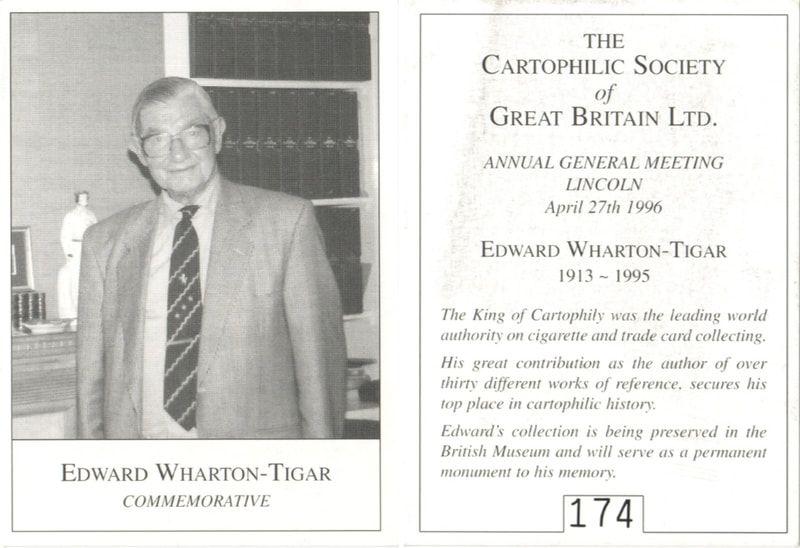 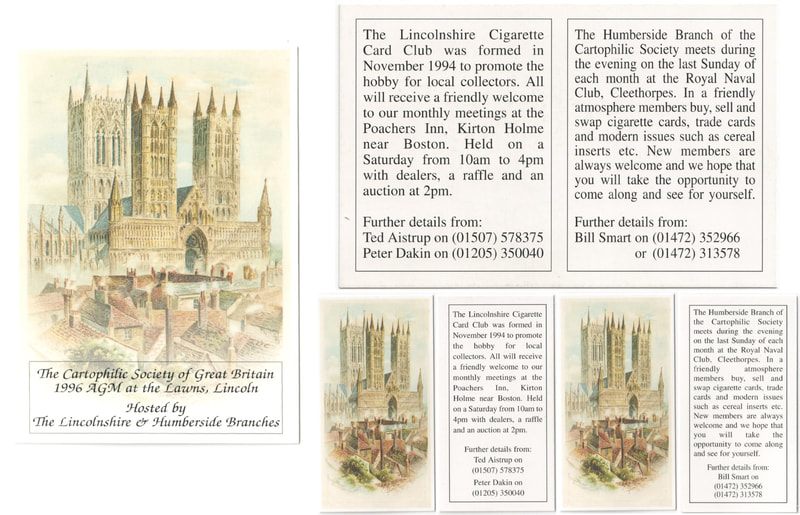 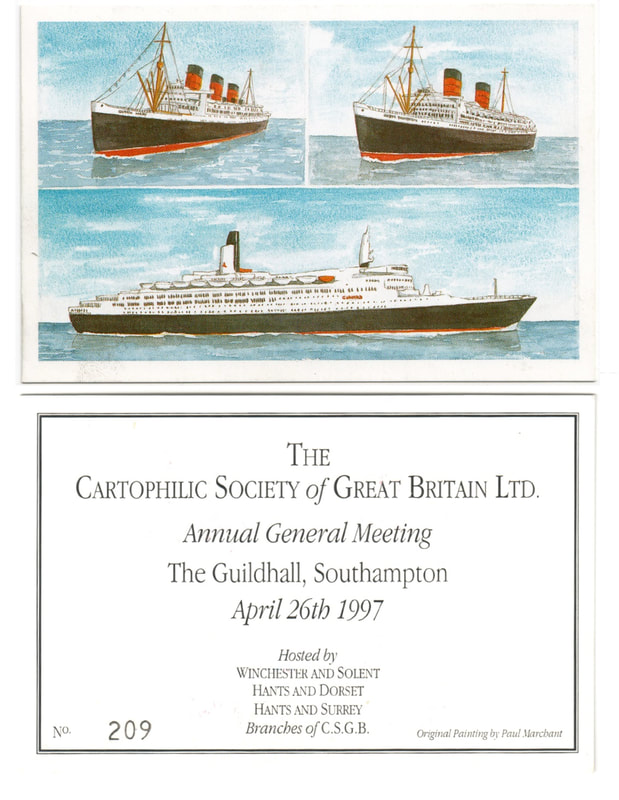 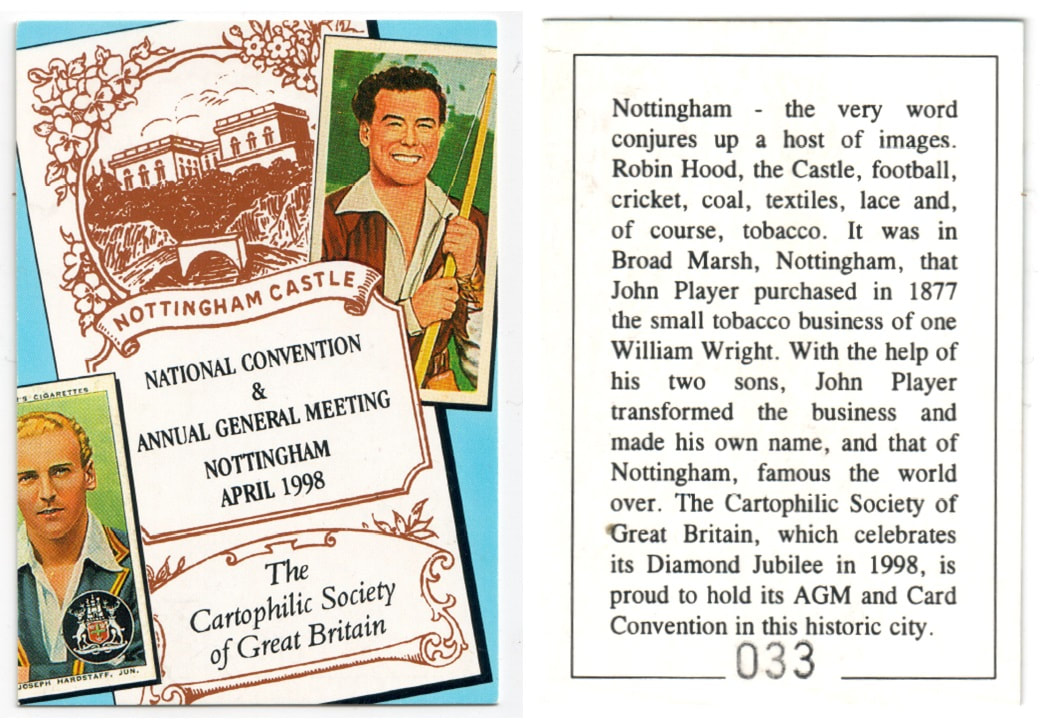 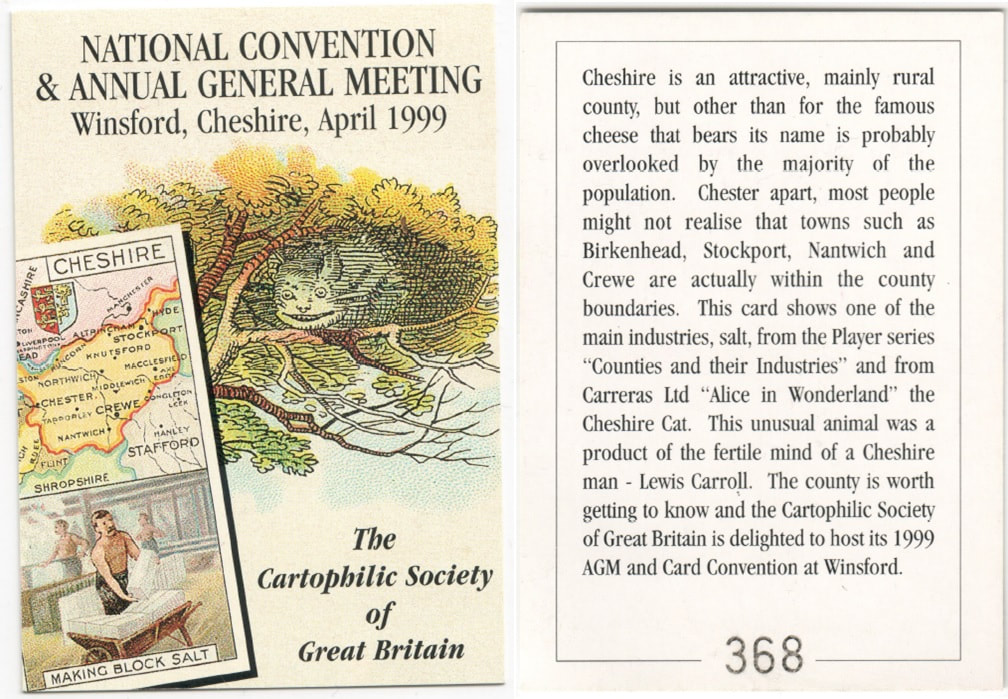 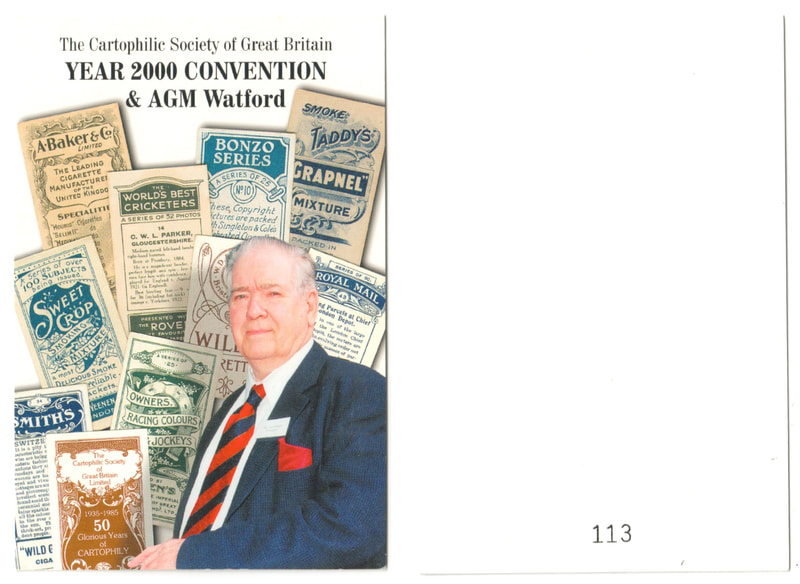 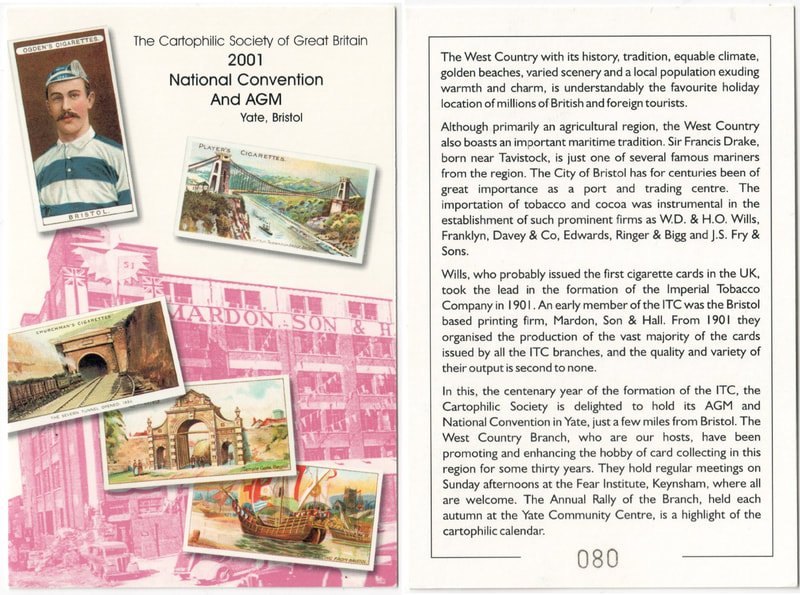 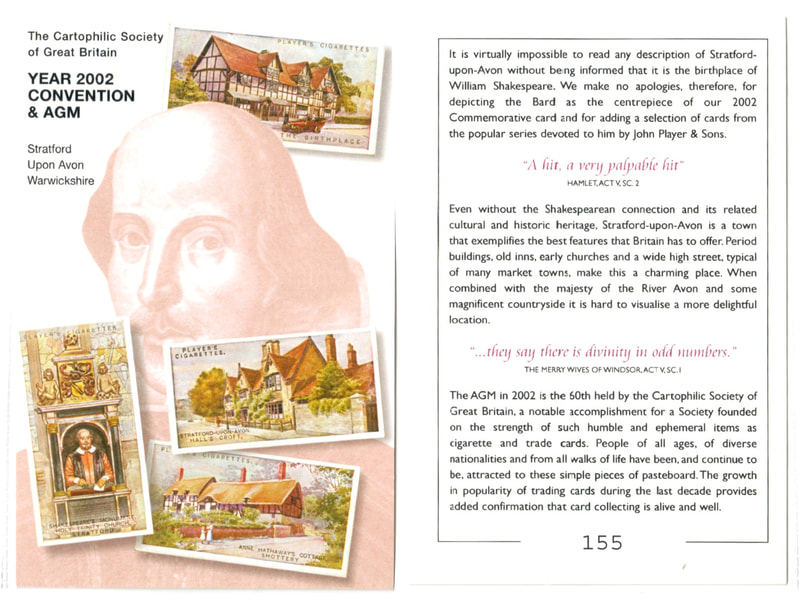 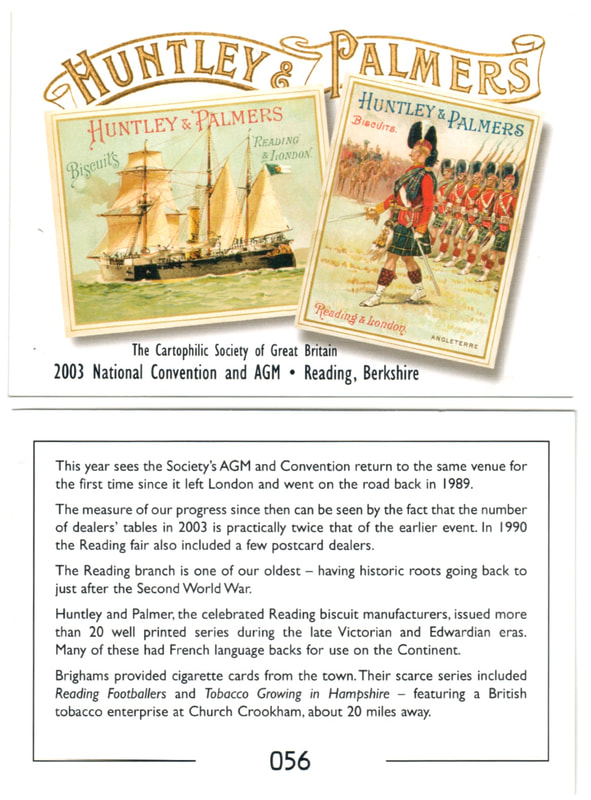 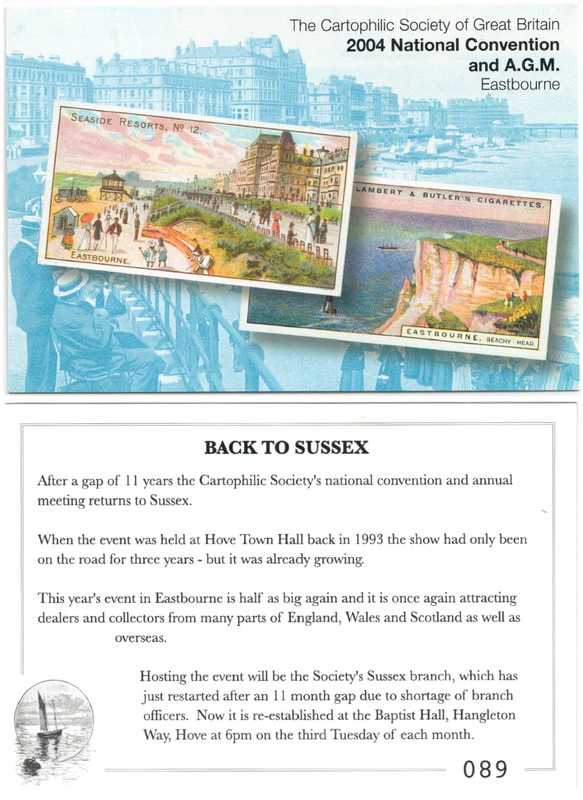 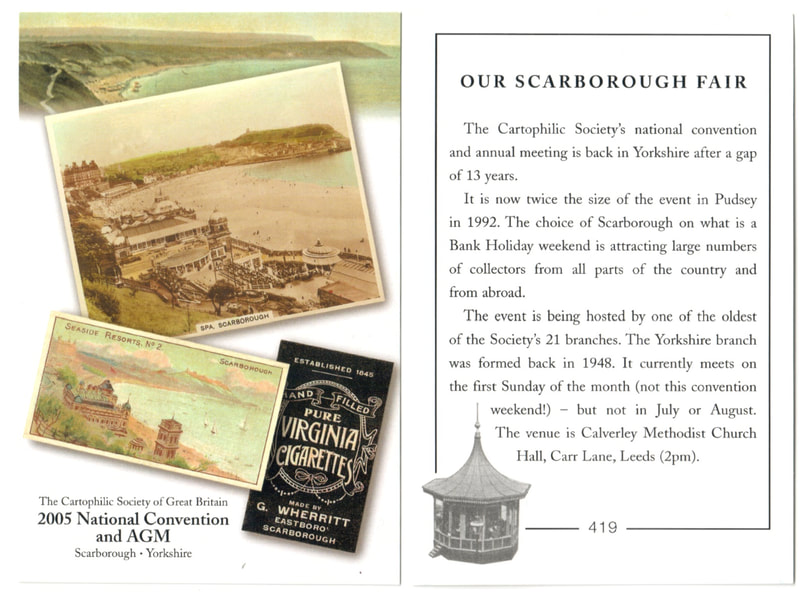 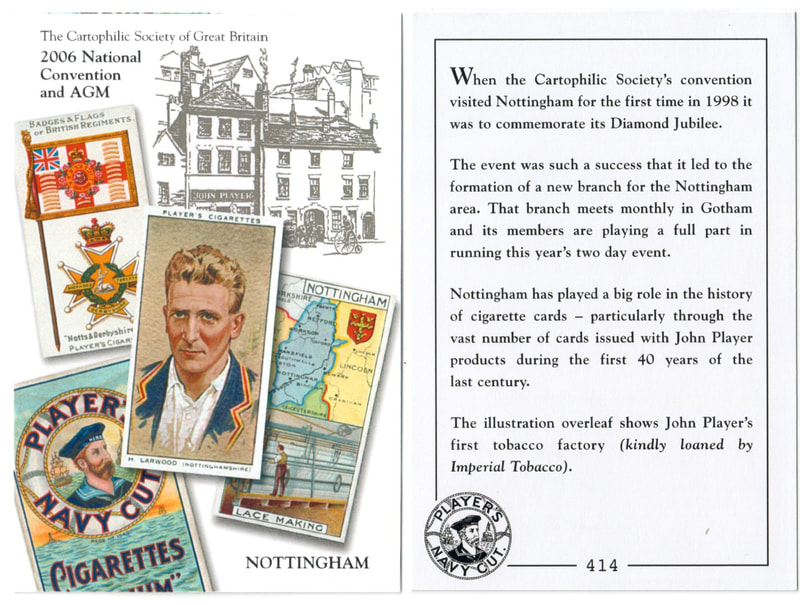 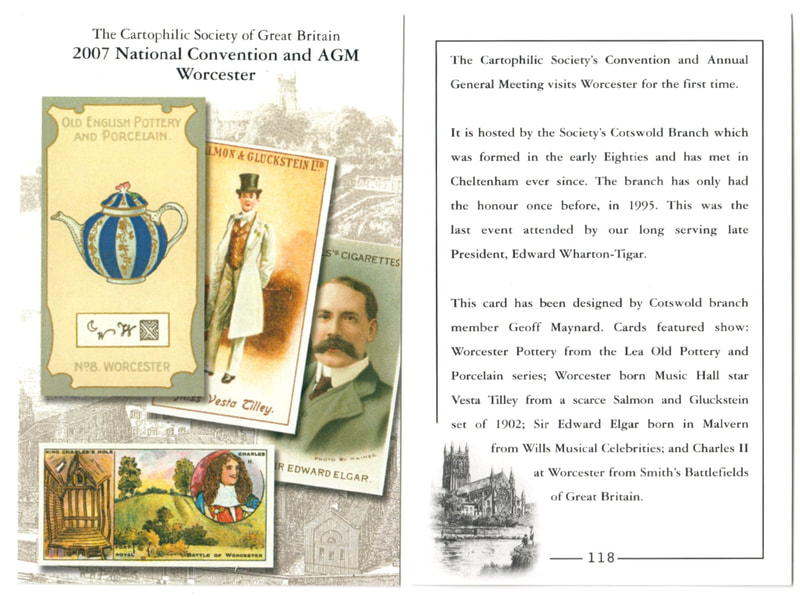 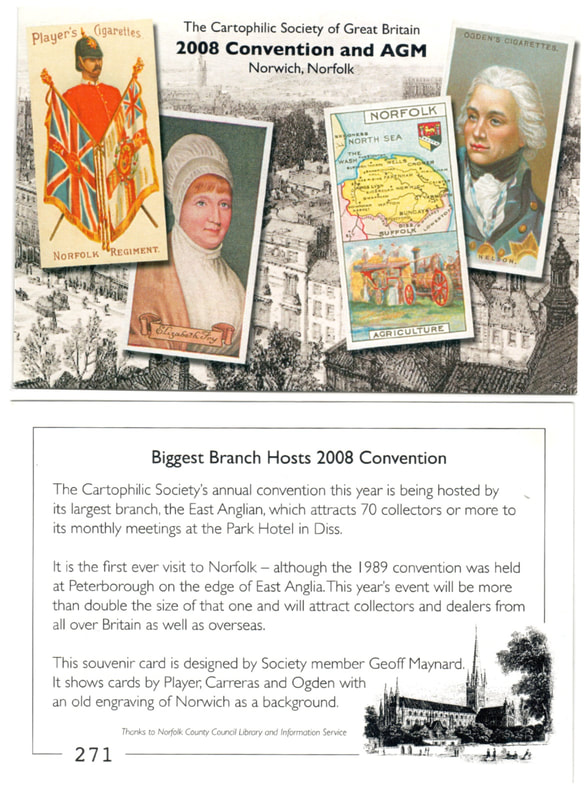 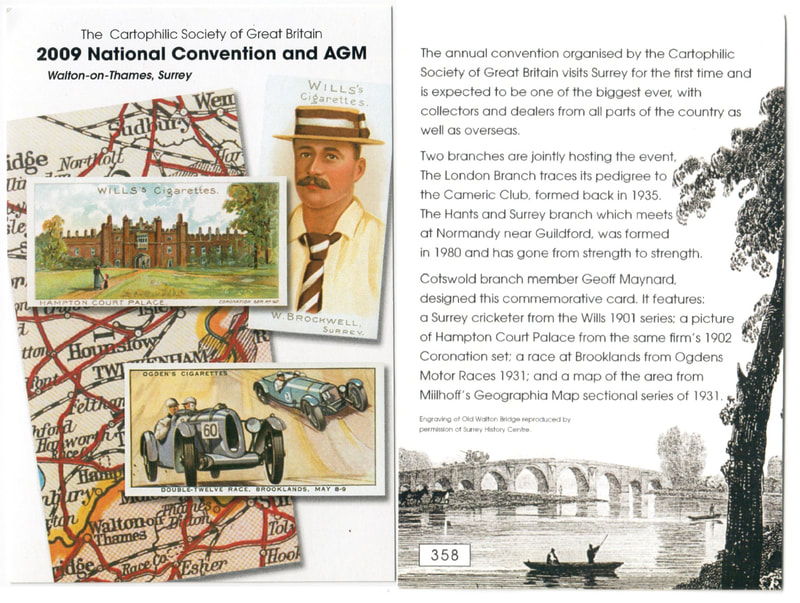 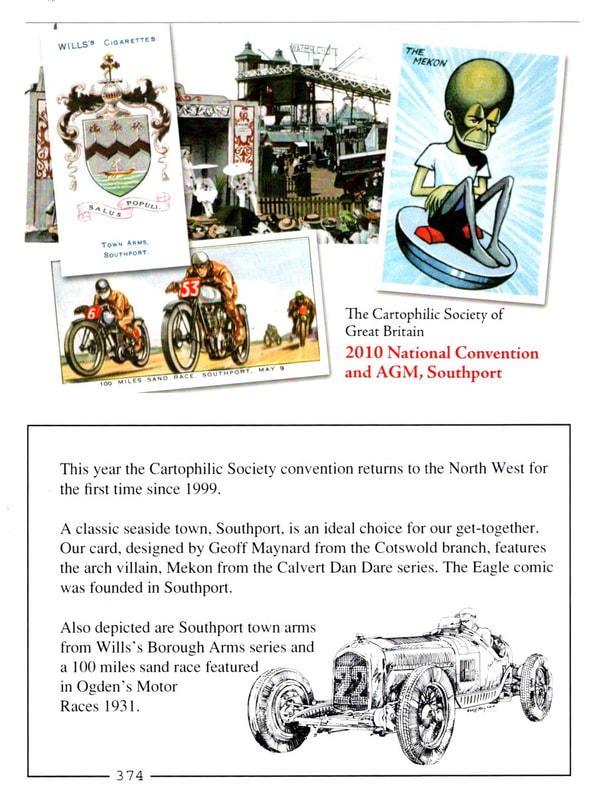 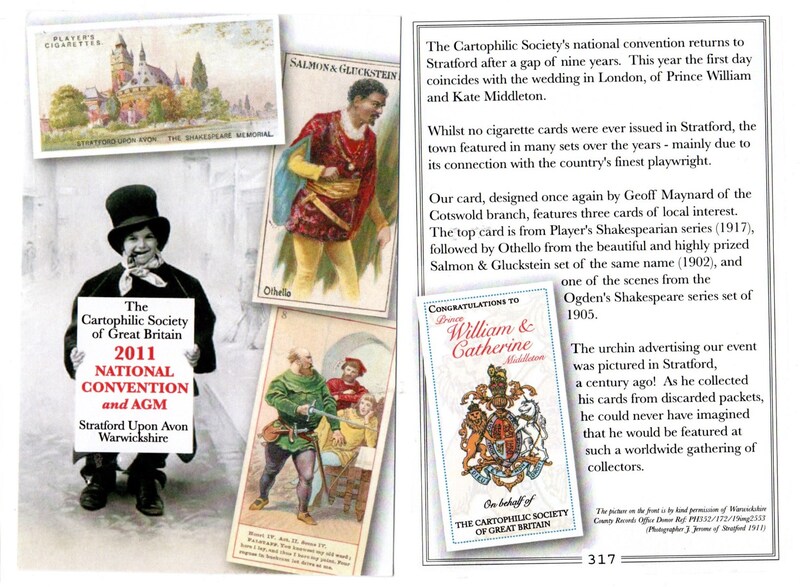 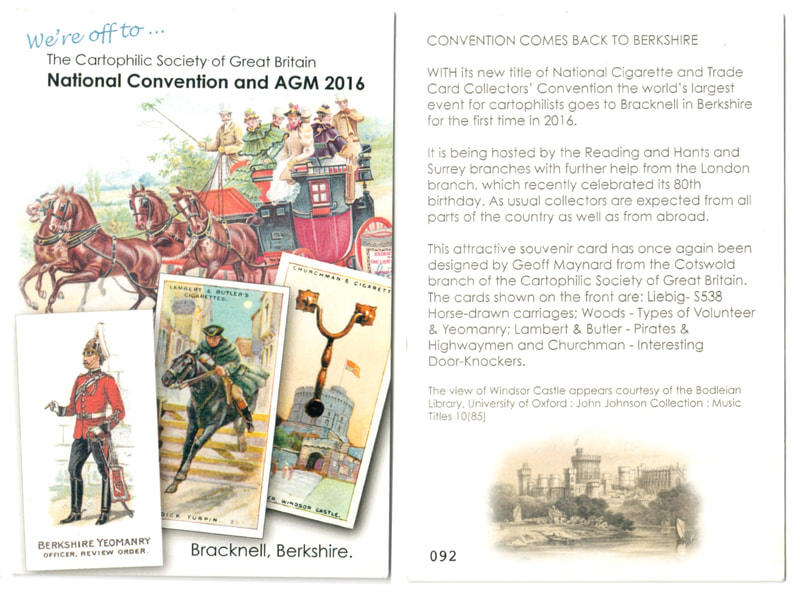 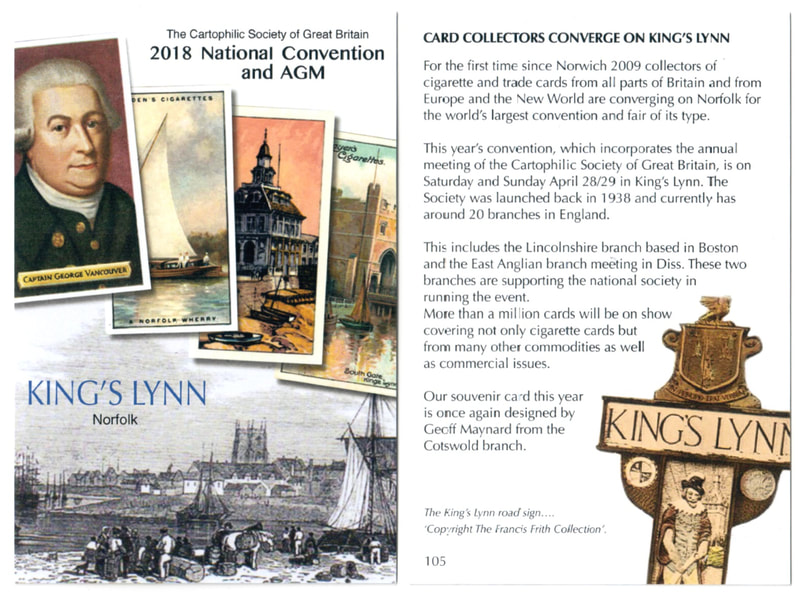 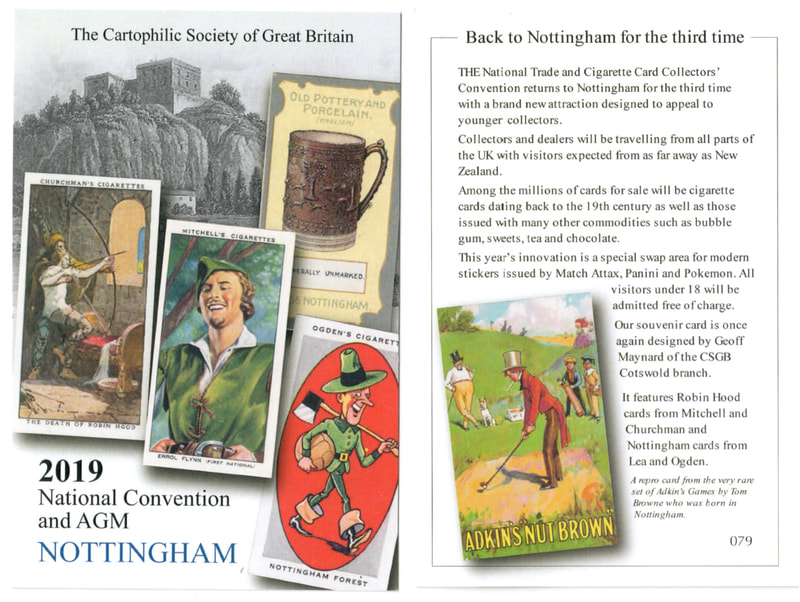