CSGB 2020 Online
We have great pleasure in welcoming Nick Oldham to this event.  If you are not aware of all the projects he does, read on!
Here is a brief 'What Nick`s been Doing in Lockdown' narrative.

Ex-Card World Editor was made redundant from his job at McCann Manchester advertising agency in July, after 32 happy years. At the age of 63 he wondered what the next step should be.. instead of going about 'looking' for employment he decided to take his time to think about his future. During his career at McCann, where he worked as a graphic designer/illustrator, he felt very confined by the Client Brand Rules and other such rubbish which, he concluded, was enough to stifle any young Creative coming into the business.

He had always wanted to follow a career in art so had, on a freelance basis over the whole period of his career at the ad agency, pursued these dreams and has amassed a large selection of self produced Cards on various subjects, mainly Sport and Pop. It also led him into the editorship of a Football Collectors' magazine, The Football Trader, which he edited for 12 years, taking it from a photocopied 12 pager into a 32 page full colour monthly magazine. During this time he was able to promote/sell some of his artworks and cards and also established good links with the Archant Life 'Shire' magazines, illustrating  the magazines 'Rich Lists' for a period of 5 years, as well as contributing to several other features they had in their  Cheshire, Lancashire, Yorkshire, Hertfordshire/ Cambridgeshire and Essex Life publications.

6 years ago, after he had finished on the now defunct football magazine, he took on the Editorship of the CSGBs magazine, Card World, for which he edited and produced artwork for the magazine for 3 years before handing over the reins to now Editor Paul Eacott.

During this period he has also helped the Card Scene Editor John Devaney on many of his projects and has, since magazine Number 4, designed and produced the Covers for all of the Card Scene magazines.

He is also currently working with Children's Author, Malcolm J. Hogan on a series of children's books based on Mal's experiences of being raised by his grandmother, the inspiration of his 'Granny Norbag' series of books...Lockdown may have halted many author's ambitions but not Granny! A film is currently in production that has been signed up to by several theatres for virtual showings after Christmas, with many schools signing up to have 'The Granny Norbag Show' zoomed into the classrooms in the New Year.

So, Lockdown brought redundancy and a new 'freedom' to creatively go wherever he wants and he has been exploring many facets of how the Virus has effected the world. His 'tongue in cheek' politicians unmasked illustrate this. His inspirations in art are primarily Van Gogh, Warhol, Lichtenstein, Lowry but finds great inspiration from 2 contemporary, lesser known artist who are not JUST artists in their own right, but close and personal friends of his. World renowned Sports Artist Paul Trevillion's quickfire, incredible art style that captures movement and feeling so perfectly, are in contrast to the  nostalgic 'Lowryesque' portraits by Leeds based Irish artist Pedar Dillon. In Pedar's art, Nick is transported back to the 1960s, the life on the streets, the grit and grime of growing up in smokey, dirty old towns...he is transported back to the communities that were held together by, not just the need to survive, but the working class social camaraderie and closeness that coloured his own childhood, full of warmth, family, friends, laughter  and ambition. It is probably the reason why Nick's subjects in his Card Series relate to his own heroes from bygone days.

He also wants to reach out to anybody in the Collecting Series to offer his services, as artist, designer and illustrator  who is looking for a working relationship on any projects they have in mind, or simply ideas they would like to grow and progress with. If that is YOU, please contact Nick via email: nickoldham@gmail.com or ring him for a friendly chat on 07941 189509... if nothing else, you will have made yourself a new friend!!
and here are just a few samples of projects past 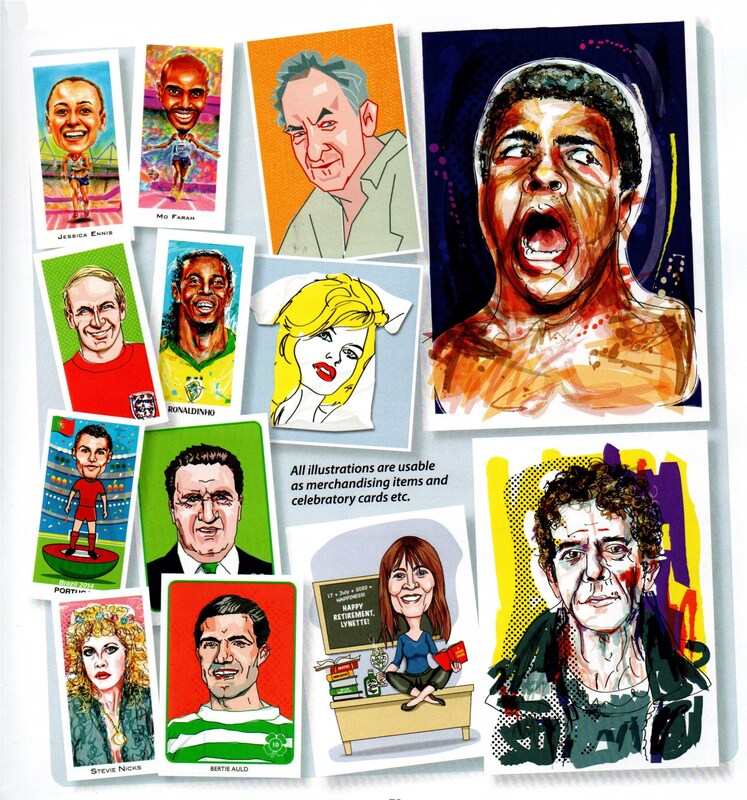